The Grovedale Parish traces its roots back to 1849 when the first German settlers arrived in the area.

What Lutherans Believe
History of the Lutheran Church 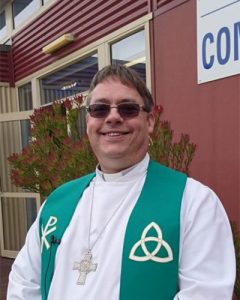 Pastor Col enjoys having fun with his family, motorbikes, fishing and ... 'Go Pies!' His favourite Bible text is Isaiah 43:1–3a.

The Grovedale Parish traces its roots back to 1849 when the first German settlers arrived in the area. They built a Lutheran day school in 1854 (the first one in Victoria), and a formal congregation was founded and began worship in the school building later the same year.

The first church was a stone building called the Trinity Church, which was erected in 1859. The present-day St Paul’s church was built in 1871. For quite some time there were two Lutheran churches separated by doctrinal differences and synod allegiances. The Trinity congregation dissolved in 1949. The building has since been demolished.

The Freshwater Creek congregation was established around the same time. They built their first church in 1859 and then ten years later built the current day St David’s church. St David’s continues to be part of the Grovedale Parish as a preaching place.

The Grovedale area was originally known as Germantown, but the name was changed to Grovedale in 1915 due to antagonism during World War I.

In the last 50 years, Grovedale has transformed from a market gardening village to a suburb of the city of Greater Geelong. In the same way, the congregation of St Paul’s has evolved to reflect the diversity of the community around it. There is still a core of the old German Lutheran families who settled the area worshipping with us. There are also a number of 'traditional' Lutheran families who have moved in from the farming areas of western Victoria. The rest of the congregation is made up of families from diverse backgrounds with a number of the most recent members being refugees or asylum seekers we supported when they arrived in our community.

In the 1970s, St Paul’s Lutheran Kindergarten was established at the Grovedale site. The kindergarten has thrived ever since and now offers conventional kindergarten for three- and-four-year-olds as well as the recently added Bush Kinder program.

We are blessed to have many young adults and families in our congregation helping us develop as a congregation to share God’s love and forgiveness in a way relevant to our 21st-century society.

In the 1970s, St Paul’s Lutheran Kindergarten was established at the Grovedale site. The kindergarten has thrived ever since and now offers conventional kindergarten for three-and four-year-olds as well as the recently added Bush Kinder program.

Geelong Lutheran College, located in the Armstrong Creek development, is a co-educational primary and secondary school offering education for students from Prep to Year 12.